In the third and final installment of our 2022 Senior Snapshot series, we meet Isabel Jerome and Wildriana de Jesús Paulino, who reflect on their last four years in Cooper's School of Art. 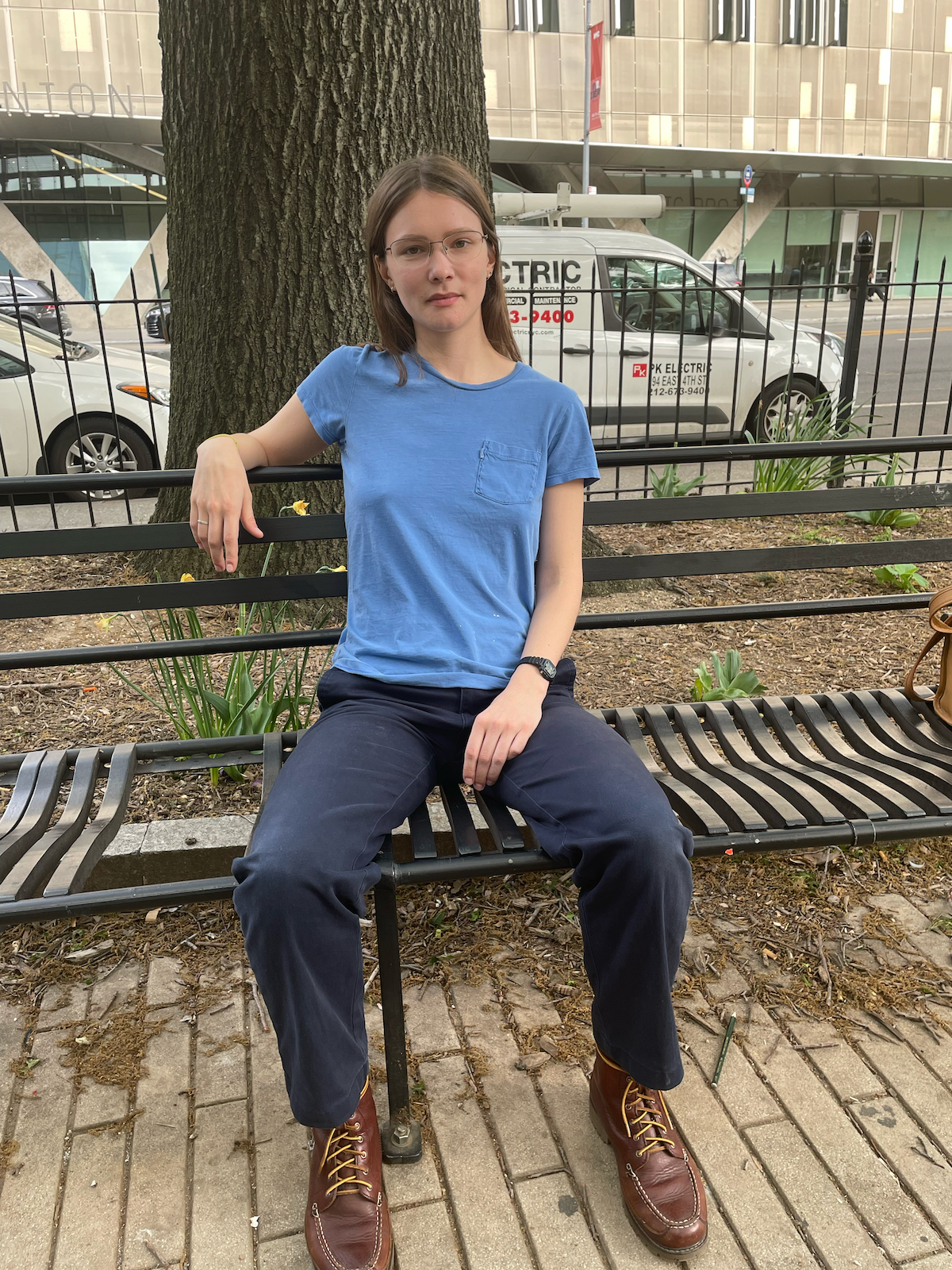 Isabel (Issy) Jerome describes her creative trajectory as a somersault through many different mediums. During high school in her hometown of Albuquerque, New Mexico, she gravitated toward writing—in the form of analytical essays, especially—in addition to visual mediums like oil painting and, ultimately, video. “I was kind of torn between art school and being an English major somewhere else,” she says. Getting accepted to Cooper swayed her to pursue art, but Issy has continued to balance her creative drive with the analytic tendencies of a writer.

“For a long time, and it may still be true, I had this trope in my head of the artist as this very emotional person who is intuitive and does things based on feeling or a gut sense of something,” she explains. “I felt like the engineer of the artists because I far preferred to write out a thesis and have plans and work through all the conceptual angles before even touching any material.”

Issy now defines her practice as photo-video-writing-based, with her attention primarily consumed, as she puts it, by the world of Adobe Photoshop and After Effects. “There’s always a sense of dishonesty when I describe a medium because I think I’m pretty indecisive, but video is central to it and writing has always been involved, even if just in the planning, journaling, or diagraming stages.” Lately, she’s been intentional about resisting the engineering instinct to articulate everything in advance. “I think that sometimes over-engineering a piece can get you into trouble by putting up a lot of barriers. In the last year I’ve tried to be more hands-on and not overthink things, and that’s been interesting but definitely feels against my nature.”

Working within largely digital mediums proved to be timely when, midway through her Cooper education, the COVID pandemic forced much of her academic and social life to move online. “I don’t know if you could say it was because of the pandemic that my work went in this direction, but so much of what I was making at that time was meant to be seen on a screen and was operating within the screen,” Issy says. As the world quickly became anchored in virtual communication like never before, she increasingly found herself exploring spatial relationships.

“A lot of my work in the last year or two has been about mediating between the digital and the physical,” she says. For her senior thesis exhibition, “Holding Up Under Special Effects,” Issy created a multi-channel video displayed on rear-projection screens. The video was shot on an iPhone and shows footage scanning the artist’s body with keyed-out, rotating objects overlaid, creating the illusion of the objects existing in space. “Digital space is interesting to me. I never thought that I cared about space until I had my senior thesis show and suddenly it seemed like in every work I was dealing with dimensionality.”

Though acclimating to New York City was not easy for the New Mexico transplant, the city has slowly grown on her. She plans on sticking around for a while and working before weighing options for graduate school, potentially applying to M.F.A. programs or returning to her passion for writing. After a rocky transition as a first-year and the disruptions of the pandemic, something just clicked during her senior year. “I’ve been a lot more involved in the social aspects of Cooper,” she says. “I’m now finally getting a sense of this community just before I’m about to leave it. But it’s been a really warm semester for me. I feel like I’m ending on a good note.”

Regardless of what the future holds in store, Issy wants to continue an artistic practice that “just happens,” which is a value she attributes to her Cooper education. “I’m glad to have this thing that’s just part of my life now, that’s just a thing that I do.” Art schools, she says, often seem fixed on the view of artmaking as a career. “Cooper was maybe more open to seeing art as totally ingrained and integrated into day-to-day life. I feel like that was a big takeaway for me.” 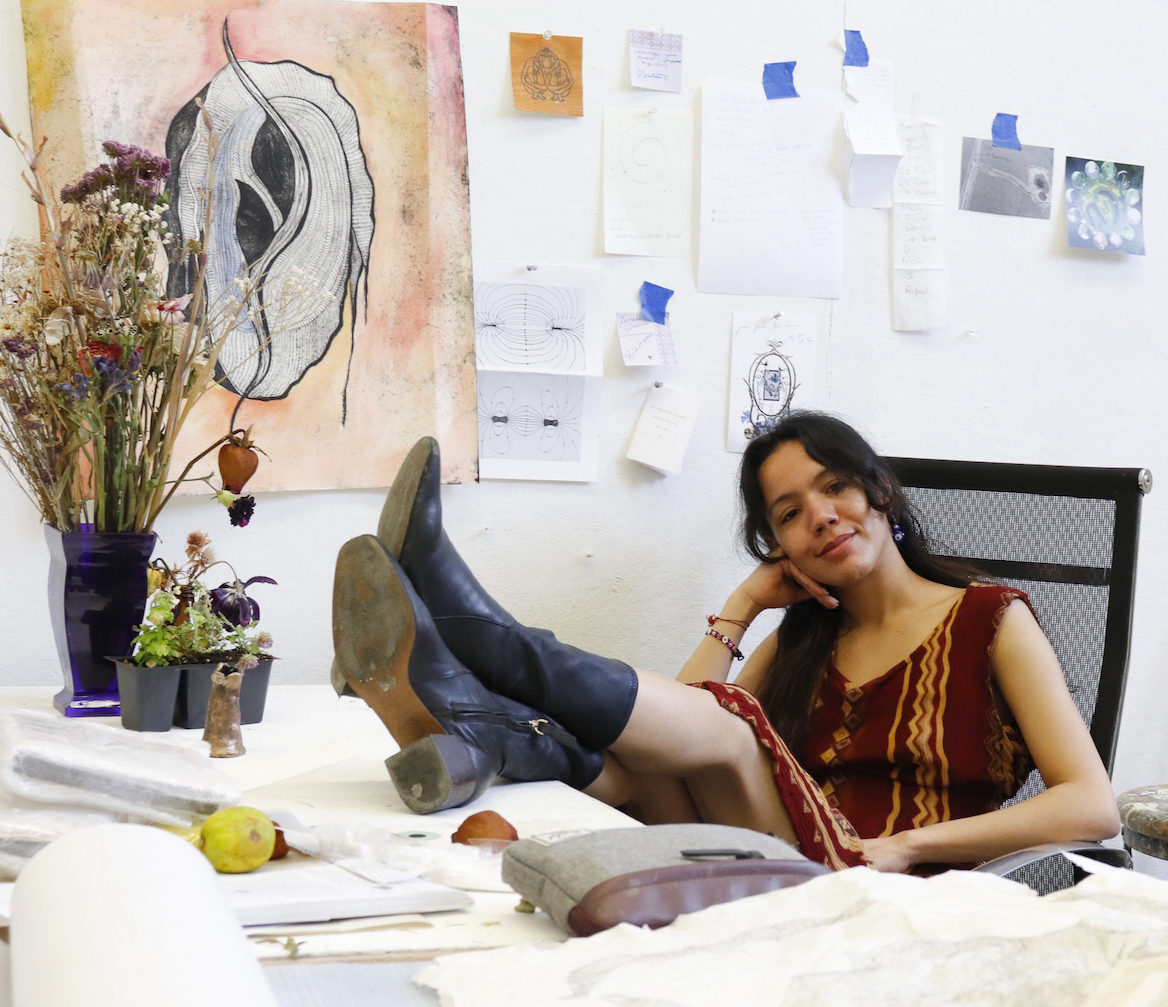 Coming to the School of Art by way of the Saturday Program, Wildriana de Jesús Paulino says she feels like she’s really been at Cooper for five years. In that time, she’s developed a multidisciplinary practice shaped in large part by her childhood in the Dominican Republic and her family life. “I grew up in a matriarchal household, and I think that shows in my work,” she says. “I was fortunate enough to have a mom who supported me and didn’t tell me to stop drawing when I was a child. I consider myself lucky because of that.”

As a teenager, Wildriana relocated with her family to New York City, fostering ambitions of pursuing fashion design, but her interests quickly shifted. “After I moved to this country, I saw how the fashion world really moves and it scared me,” she says. “It was disappointing, so I started leaning more toward art. Now, I think fashion was just a way for me to be introduced to many other mediums.”

During high school she focused on semi-abstract and figurative oil painting, but she’s since then incorporated a much wider range of mediums into her practice—from drawing and printmaking to sculpture and even photography. Studio time and coursework at Cooper also provided creative opportunities to connect her early student work to involvement in activism outside of school, particularly focusing on issues like women’s rights, immigrants’ rights, politics of labor, and the history of U.S. invasions in Latin America. “It wasn’t until my sophomore year that I began what has developed into my practice today, which is my research on femicide, the killing of women for the condition of being female,” she explains.

Seeing the culture surrounding femicide, which is widespread in the Dominican Republic, prompted Wildriana to start considering perspectives on victimhood, remembrance, and autonomy through her work. “I grew up seeing it every day in my surroundings, walking down the street or turning on the TV, another woman is killed. It was just so normalized and common, I began questioning why it wasn’t a shock for so many people,” she says. “When I came to this country, I was finally able to withdraw myself from that picture and look at it from a different side. We’re talking about 130 to 150 women being killed each year in this context of femicide alone.”

At first, she began investigating the issue through infographical mediums, such as creating individual memorials for each of the 2019 victims of femicide in the Dominican Republic. “It was important for me to talk about the names of the victims because they were often only shown as statistics and numbers.” Another memorial work, Decadencia (2020-2022), features a compilation of 50 individually bronze-caste statues leaned against a wall. The statues were included in her senior exhibition and were also arranged along a staircase of 41 Cooper Square during the 2022 End of Year Show.

Lately, Wildriana’s work has moved into abstractions that engage the notion of women’s autonomy by way of “collaborating with the environment,” as she describes it, which means utilizing organic elements and materials but also allowing those materials to simply be themselves. “I see machismo as what enables these murders, and I am beginning to come to the conclusion that I want to relate the female body with earth, because for me earth is autonomous,” she says. “Earth is what grounds all of us and without it we cannot sustain life. That’s why I began to use organic materials, especially soil, in my art. I am trying to give back the autonomy that is taken away through these violent acts.”

Her interest in organic materials and techniques has also complemented her fondness for papermaking, for which she uses a method of air-drying that allows the paper to curl and warp into spontaneous forms. “I like to say that I make a collaboration with the air. I make the paper and the air does the rest.”

Wildriana is now looking for residencies with the eventual goal of graduate school. But in the nearer term, she will continue her studio practice in New York where there is plenty to occupy her time, including making use of the facilities at Robert Blackburn Printmaking Workshop, where she previously interned, and working on a new portfolio collaboration between artists and writers. She'll also be participating in the 2022 New York Latin American Art Triennial and was just recently awarded the Jacques and Natasha Gelman Foundation Prize. “I liked the city before, but I feel like now that I’m leaving Cooper I have really come to appreciate living here,” she says. “I like to be busy.”