Apply to the School of Engineering

The Pathways to Innovation program is co-managed by Stanford University and the National Collegiate Inventors and Innovators Alliance (NCIIA.) The Cooper Union will participate for two years, sending faculty representatives to conferences and meetings with other members of the cohort to share knowledge and ideas. The Pathways program pays for all travel expenses. Yash Risbud, director of the C.V. Starr Research Foundation, has been appointed leader of the academic team for The Cooper Union that also includes professors Ruben Savizky, Cosmas Tzavelis, Eric Lima, Alan Wolf and Acting Associate Dean George Delagrammatikas.

"These gatherings are invaluable, as they provide an interactive forum for all cohort schools to present, listen and learn from each other," Prof. Risbud says. "We've already seen tremendous benefit by having other cohort members provide resources and information on areas that Cooper wants to explore in the short and long term."

An article in the Summer 2013 issue of The Bridge, published by the National Academy of Engineers, outlined the motivations for the Pathways program. "Ongoing innovation is required to address pressing problems and to maintain America’s global competitiveness, and engineering is the foundation of much of that innovation," the authors, who head the Pathways program, wrote. "It is no longer enough to come out of school with a purely technical education; engineers need to be entrepreneurial in order to understand and contribute in the context of market and business pressures."

"The short of it is, many other institutions have been able to create programs, classes and extra curricular activity around these themes, but they haven't really been able to take them and embed them into classes that expose them to every enrolled student," Prof. Risbud says. "So the thesis is, how do we as a group and as an individual constituency find a way to take what we know is valuable, and universally expose students to a meaningful baseline of entrepreneurial content in a classroom experience?" 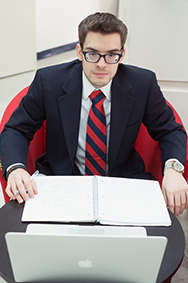 Epicenter also sponsors a student-level program, the University Innovation Fellows, and recently announced Nicholas Breeser, at left, a Cooper Union mechanical engineering sophomore, as a 2014 member. He joins Sharang Phadke, an electrical engineering senior and co-founder of Create@Cooper, who was named a fellow in 2012. The fellowship included a six-week workshop and a trip to Silicon Valley to meet with other members who work, "to create lasting institutional change that will increase student engagement with entrepreneurship, innovation, creativity, design thinking and venture creation," according to Epicenter.

"There is a lot of innovation and entrepreneurship in the New York City area and I don't feel like Cooper students are as much a part of it as we should be," Breeser says. "We are made up of creators and some of the projects push boundaries but too often the students think, 'Yeah it's cool but I don't want to try to take this market,' or, 'I don't really care to show if off to other students.' But seeing what others are doing has an impact."

Breeser says his biggest objective is to find ways that would allow better, easier sharing of work between students of all three schools. "The fellowship culminated in a conference in San Jose where we toured Google and Stanford's design school and there were lots of elements of those environments that could be introduced here that I think would bring the schools together," he says. "Having a space where we could actually bring artists and architects and engineers together I think could really be the next step."