Fighting Against Displacement: Housing As A Human Right in NYC

Housing is a human right. In New York, however, it has never been treated that way. Rents are rising at alarming rates and so many tenants are simply unable to pay their rent, especially after the pandemic. With rezoning after rezoning over the last decade, low-income communities of color face extraordinary pressures of gentrification and displacement. And regardless of what tenant protections exist on paper, city government does very little to meaningfully enforce them. The housing crisis in our city is a struggle for racial justice, and it is urgent. NYC must ensure that every human being has an affordable, permanent, and dignified place to live and that urban planning policies are comprehensive and affirmatively further fair housing. 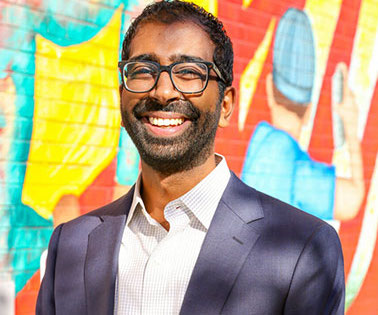 Shekar Krishnan BSE'06 is the Co-Founder and Chief Program Officer of Communities Resist, a legal services organization highly acclaimed citywide for its community-rooted, intersectional approach to housing and racial justice in North Brooklyn and Queens. Mr. Krishnan has spent over a decade representing low-income tenants and neighborhood coalitions in fair housing litigation and anti-displacement advocacy in communities suffering from the highest rates of gentrification in the city. Representing a coalition of 40 community organizations, public housing projects, and tenant associations, he led years of litigation against New York over a city rezoning that violated the Fair Housing Act, resulting in a landmark settlement that set precedent across NYC. In addition to his professional work, Mr. Krishnan is a longtime community activist in Jackson Heights and Elmhurst, Queens, two of the largest immigrant neighborhoods in the country. He has authored numerous articles on housing justice and led citywide efforts around the provision of anti-displacement legal services. Mr. Krishnan received his law degree from the University of Michigan Law School, where he was a Clarence Darrow Scholar and co-leader of an immigrant and labor rights student organization serving communities just outside of Detroit. He received his undergraduate engineering degree from the Cooper Union for the Advancement of Science & Art, where he was an active member in student organizing.

This series is co-organized by the Office of Student Affairs and Associate Dean Nada Ayad as a continuation of a reading and discussion series for first-year students that was held as part of the Fall 2020 new student orientation. In the spirit of The Cooper Union mission, the Black Student Union and the Cooper Climate Coalition, along with several other Cooper students and faculty, were deeply involved in the articulation of the program as well as in contributing to the reading list and suggesting speakers.